Hello Storm Mountain, we have a winter weather advisory in effect for Thursday, November 17 at 5 AM through Friday at 9 AM.  Please be prepared for winter conditions and drive safely to your destination.
The details for the winter weather advisory can be found here.
Have an excellent evening!
Connie Garrett
Storm Mountain PID #55
Email: stormmountainpid@gmail.com
Website: https://stormmountainpid.blogspot.com/
Voicemail: 970-429-5350
at November 16, 2022

Storm Mountain PID #55 Quarterly Advisory Board Meeting
November 5, 2022
Board Members
Andy Hitch, Chairperson
James Toland, Treasurer
Connie Garrett, Secretary
Joe Leo, Advisory Board Member
John Lodico, Advisory Board Member, not present
The meeting was started by suspending Robert’s Rules.
Summer Work: Grading on areas of the mountain was discussed that need end of season grading: Storm Mountain Drive and Snow Top to Spruce Mountain. Foster Dirt will grade frequently areas around the mountain but will only grade the Access Road twice each season due to the high volume of traffic. The areas that require re-work need to be communicated with Foster Dirt as the season wraps up and budget is exhausted.
Plowing and Sanding: For large storms where more than 12” of snow is forecasted in a 24 hour period, OTRR has suggested a change in the plowing process. In the current process, green roads are plowed ditch to ditch first, and then red roads are plowed ditch to ditch. This creates a challenge because snow builds up on the red roads, making them difficult to plow. OTRR suggests that a single lane be plowed on red roads as they are passed on the green road route; a two-car width will be plowed (where possible) on green roads to maintain maximum traffic flow. After this, OTRR will follow up on all roads and plow ditch to ditch. Plowing ditch to ditch is required to prepare for future snow events as the roads tend to narrow as snowbanks build through the season. The board approved this change for large storms where more than 12” of snow is forecasted. It should be noted that this is only likely to happen a few times per season. For storms where the snow forecast is below 12”, the regular plowing guidelines will be followed. OTRR requested to change Spruce Mountain Drive past Green Ridge to a red road. The board discussed this change and opted to keep this section of road as green. Bandit Rock Road should be plowed as any other red road and not passed over.
James will create a plowing and sanding policy to share with the community which will include the following information:
Results of the Sanding Survey: We had 70 responses from the community regarding the sanding survey. The results are shown below. Sanding will be scaled back when there is only a dusting of snow and when the sun will melt snow and ice on the Access Road, otherwise sanding will remain the same as previous season. The board also discussed the salt content of the sand mixture. The current sand mix has a 5% salt content. There is some concern regarding the impact salt has on the road and environment. Also, the salt only melts down to 15 degrees; once the surface melts, it refreezes and causes a slick surface once again. James will check with the county engineer to get input on using a non-salted sand mix. Salted sand mix is also more costly. The sand barrels are full and ready for the winter season. Areas of the PID district that are not on the Access Road will no longer be sanded. These areas were identified in previous years (Snow Top\Palisade intersection, Spruce Mountain Dr, Lakeview, Cedar Park switch backs); the board decided sand was not useful in these zones. 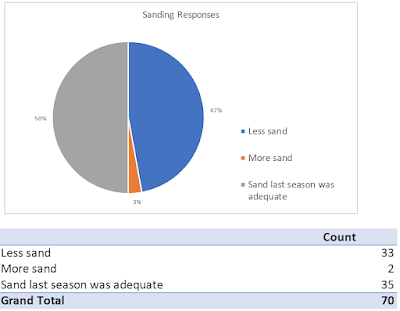 Snow Depth Reporting: The board and OTRR have reached out to designated spotters to request the depth of snow on the road in various locations on the mountain. This input will be used to determine when snow plowing operation begins.
Communications: PID contact with OTRR will be in this order: James, Andy, Joe, Connie. PID will continue to send emails to community when snow is in the forecast. PID will send email when Access Road has been plowed or sanded.
2022 Budget: The 2022 budget was reviewed with most recent expenses included except for the invoice for the voicemail from Segway Communications for $89. The budget is shown below. Summer road work went over by $25K, this was primarily due to the county communicating the purchase order amount to Foster Dirt. The county does not take into consideration funds that are reserved for emergency and chip seal. James will work with the county to ensure that this miscommunication does not occur in the future. The PID will also request more frequent invoices from Foster Dirt to monitor expenses. The PID will also change the workflow by only giving approved projects to the contractor as opposed to the comprehensive list of identified work. The comprehensive list far exceeds the annual budget for summer road work. The PID will also reserve funds for end of season work for touch up grading in high traffic areas.

Email ThisBlogThis!Share to TwitterShare to FacebookShare to Pinterest
Labels: Minutes

The PID quarterly meeting will be November 5th, from 11am to 12pm. It will be virtual on Google Meet (free for everyone).
The subject of the meeting is the winter plow/sand season. Here are some topics we will discuss:
The 2022 Budget will also be reviewed.
Storm Mountain PID #55
Email: stormmountainpid@gmail.com
Website: https://stormmountainpid.blogspot.com/
Voicemail: 970-429-5350
at October 30, 2022

Email ThisBlogThis!Share to TwitterShare to FacebookShare to Pinterest
Labels: Announcements

With the heavy rains this last week, please consider checking that the culvert on your private driveway is draining properly. The culverts can get clogged very quickly in the heavy rains and diverting water from the public right of way saves us all money. Reach out to the PID if you need assistance cleaning your culvert and we’ll see if we can connect you with a volunteer willing to help.

The contractor has completed grading and ditching in the lower filings.  We have a lot of work scheduled in August, so expect to see the crew working around the mountain.  The scheduled work is detailed below and will adjust based on weather and availability of materials.

Mag chloride will be applied from Lakeview to Snow Top/Palisade intersection later in the season, and we will share specific dates when we have it. Please drive cautiously around work crews, and allow yourself extra time to get to your destination safely.

Have an excellent weekend!

July 9, 2022
Recording – the recorded meeting is available via the following links:
Video and Audio
Audio Only
Board Members
Andy Hitch, Chairperson
James Toland, Treasurer
Connie Garrett, Secretary
Joe Leo, Advisory Board Member
John Lodico, Advisory Board Member
The meeting was started by suspending Robert’s Rules. The Annual Owners meeting and Advisory Board meeting will be blended into one meeting. Board members introduced themselves and officer roles were re-confirmed.
Grant Status – The board applied for a federal grant to improve materials on the Access Road through the Community Project Funding. The project was not awarded a grant; however, we will continue to look for grant opportunities and will reach out to community members that have experience in obtaining federal grants. There was some discussion on doing a GoFundMe to raise money for a specific road project.
2022 Budget – The 2022 budget was reviewed and approved. The slides from the budget review are provided below. While the 2022 budget is more than 2021, there is concern that inflation will impact the budget. The board will discontinue allocating the budget by zones on the mountain, and instead will focus on main routes and roads that require the most work based on traffic and condition of the road. An analysis of traffic counts was performed by the county in 2021; the results of that traffic count are included below the budget slides. The PO Box will be discontinued to save money; the board will request a free eBox. 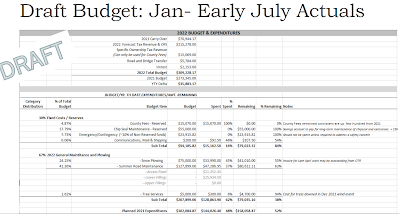 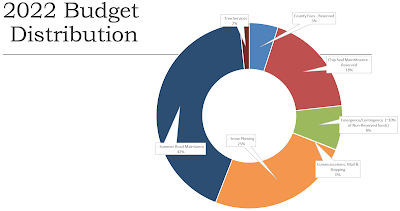 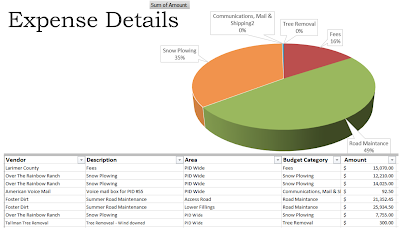 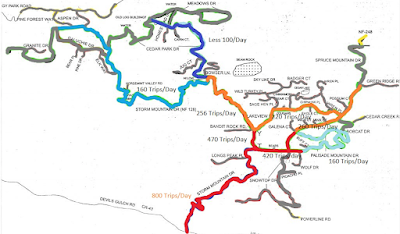 Winter Sanding – There was discussion on the cost of plowing. Storm Mountain pays a premium for services in part due to the insurance that contractors are required to have with the county, and due to the high-cost equipment required to perform work on Storm Mountain. Sanding was a contributing factor for the overall cost of plowing. 60 tons of sand was applied to the Access Road this last winter season. Too much sand has a negative impact on chip seal and road base and is also considered ineffective during an active snow event. The residents present at the meeting supported less sanding due to cost and negative impact on chip seal/road base; however, a poll will be sent to the community to get more feedback.
Summer Projects – the board drove all 27 miles within the district to identify areas that required work. Projects were identified; cost estimates and priorities were assigned. Drainage is a high priority for 2022: culverts and ditches help prevent erosion and extend the life of road base. Culverts that cross the public right of way are within the PID district. The PID will not purchase culverts for private driveways, but this may be considered on a case-by-case basis depending on the impact to the public right of way. Foster Dirt will patch some areas of the chip seal this season; most of the chip seal budget will be reserved for 2023. The Access Road received a mag chloride treatment in the early summer. An additional mag chloride treatment will be applied in the fall.
PID Website – a new website for the PID is available and was created at no cost. The address is https://stormmountainpid.blogspot.com/ Documents and information will be available on the web site. Questions and concerns can be submitted via the web site. The board will transition into using this site as the primary source of information. Future PID communications via email and social platforms will point to this website. Note: the county also stores public PID information on the Larimer County website. Monthly statements will be available on the county website after August 10th. The Larimer County PID website address is here: https://www.larimer.gov/engineering/improvement-districts/more-info
Additional Comments – There were no additional comments for discussion.
Thank you,
Connie Garrett
Secretary
Storm Mountain PID # 55
at July 25, 2022

Email ThisBlogThis!Share to TwitterShare to FacebookShare to Pinterest
Labels: Minutes

Email ThisBlogThis!Share to TwitterShare to FacebookShare to Pinterest
Labels: Announcements

Foster Dirt was selected by the county to perform our summer work.  Justin Foster and his team have been supporting our community for a few years.

Please be careful and courteous on the roads as the Foster Dirt team works.  If you have any questions, comments or requests,  please focal point them through the PID.  stormmountainpid@gmail.com

The warm season road work is underway,  a quick summary of planned work:

We have setup a blog to support more direct communication to the residents and owners on Storm Mountain.

Communications will be focused on upcoming PID meetings, planned work, and work underway.

Please use the contact the PID form (located to the right, on the main page) if you have any questions or comments

Hello Storm Mountain, we have a winter weather advisory in effect for Thursday, November 17 at 5 AM through Friday at 9 AM.  Please be prepa...